French Montana FIRES BACK at 50 Cent! “THIS BEEF IS OVER.” – Hip Hop Trends

French Montana FIRES BACK at 50 Cent! “THIS BEEF IS OVER.”

French Montana FIRES BACK at 50 Cent! “THIS BEEF IS OVER.” 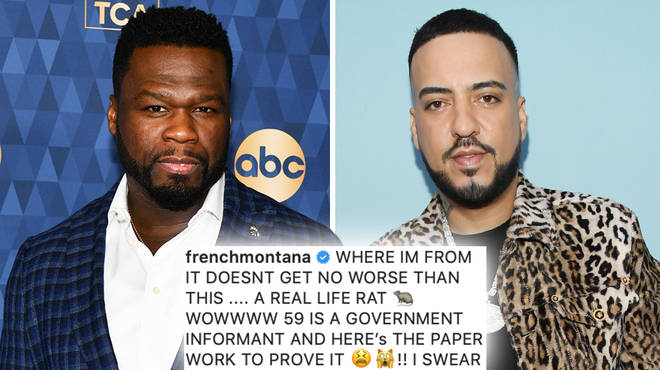 French Montana calling 50 Cent a "rat" with the release of the "snitch papers".

If you don’t know, lets provide the back story to the latest celebrity rapper feud between French and 50 Cent. It all started with Fifty. Being the internet troll he has always been, he went on a comment spree when French Montana purchased his new ride, a decade old Bugatti Veyron. Fifty posted to his Instagram; ultimately clowning the age of French’s new whip. Besides the age, The ‘Candy Shop’ rapper accused French of faking the purchase and actually leasing the vehicle for multiple years. On top of that, he went on to claim that French Montana has been faking his streaming figures for the clout.

French Montana hit back heavy with an older looking photo-shopped photo that looks like 50 Cent passionately “kissing Eminem”. French followed up with a shocking post. He released a video to his Instagram showing ‘Snitch Papers”, which names Curtis Jackson, 50 Cent, as an informant. French claims in his caption “Where I’m from it doesn’t get no worse than this. A real life Rat. WOWWWW 59 is a government informant and here’s the paperwork to prove it!!! I swear this is my last post. This beef is over. He already called the system on me!! I had to put the nail in the coffin.”

Is the beef really over? Where did French get that paperwork? Will 50 Cent ever address this ? We’re waiting to see.